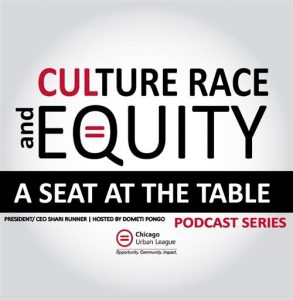 “CULture, Race & Equity – A Seat at the Table” is a ten-part series featuring conversations with community stakeholders, advocates and policy experts providing actionable solutions to some of Black America’s most pressing issues.

(CHICAGO) — The Chicago Urban League launches its first podcast on October 16, 2017 entitled, “CULture Race and Equity – A Seat at the Table.” Facilitated by journalist Dometi Pongo, episodes feature President and CEO Shari Runner, as well as a racially and ideologically diverse group of social advocates, business leaders, educators and community stakeholders. The goal of these curated conversations is for Chicagoans to learn about actionable solutions to racial inequity so that they can be a part of the movement to make meaningful, impactful change here in the city and within their own communities.

The inception of the podcast was inspired by events produced for the Chicago Urban League’s race and equity initiative, which positions race, structural racism, and racial equity at the front and center of policy discussions and decisions in Chicago. The events — from the League’s On the Table conversation to forthcoming convenings and educational events on racial equity — are intended to replace partisan chatter with productive dialogue that provides an avenue for people to become engaged in the work of social justice. The podcast, “CULture Race and Equity – A Seat at the Table” will build off of these conversations, presenting a mix of perspectives and highlighting sound ideas to advance equity from liberal and conservative experts, advocates and citizens alike.

“One of the reasons we’re doing these conversations about race and equity is [to address] racial stereotypes, how we participate in this society, and what we have been able to gain as a result of being American citizens,” said Chicago Urban League President and CEO Shari Runner in the show’s first episode. “America was built by slaves…and we know that there is no other race or ethnicity that deals with their racial identity as much as African-Americans do.”

Episodes, published 6AM every Monday morning beginning October 16th, will address income inequality, the Wage Gap, disparities in primary and higher education, healthcare, public safety, economic disinvestment and police reform. Visit CULPodcast.com for a preview of what’s to come and an interview with President Shari Runner. CULture, Race and Equity can now be found in iTunes, Soundcloud, and all other platforms.

For more information about the Chicago Urban League’s podcast, contact Sabrina Greig at (773) 451-3508 or visit www.CULPodcast.com.

Chicago Urban League Calling for Federal Investigation of the Chicago…